The True Meaning of Halloween

Halloween III: Season of the Witch. The relevant passage begins at 6:33.
You may be wondering why I keep referencing a B-movie that had nothing whatsoever to do with the Halloween franchise and which many critics denounced upon release. One of the gentler reviewers at the time accused it of "being anti-children, anti-capitalism, anti-television and anti-Irish all at the same time."

Screw 'em; they missed the point. Oh, sure, there are plot holes galore, but I LOVED the damned, misbegotten thing for a number of reasons. Here's one: 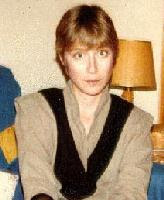 This is my friend Pam (cute as can be, isn't she? Why, oh why did I never take advantage of her?). In October of 1982, when Halloween III was released, Pam had just been dumped by her boyfriend du jour and was feeling a little... out of sorts. I sympathized, empathized, and suggested a movie might be an appropriate distraction and since I was going to Halloween III anyway, she might want to tag along. Hey! Free movie, free popcorn, free drinks, a bit of catharsis, the pleasure of my ever-charming company [sic], what could be better? I raved about the fact that this film was different from the two Halloween films that preceded it and she agreed to go, albeit reluctantly.

Unfortunately, Pam was not a big fan of of trashy, non-classic blood-'n'-gore horror flicks. When the "misfire" sequence finished (if you've seen it you know what I'm talking about) she walked out for a cigarette and took her sweet time in returning. To her credit, she made it through the rest of the movie, but was obviously unthrilled with both it and me.

A few days later I found a message on my answering machine: Pam singing "(X) more days till Halloween, Halloween, Halloween..." This continued once a day, EVERY day, for the rest of the month and every October for several years thereafter... just in case I hadn't fully comprehended her intent and meaning.

I love my friends and I love Halloween III. 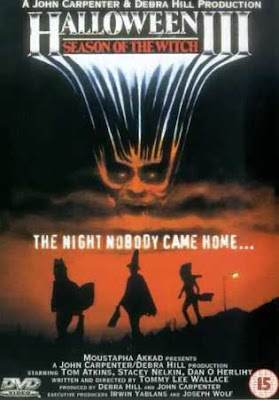 You saw this before i did and related the monolith smuggling incident to me back in '82 (?). I am glad that by the third installment they got the pronunciation of Samhain correct (it's closer to Sa-win or Sow-in) in Scottish Gaelic). I remember Don Pleasance running around in the second one going on about "Samhain Samhain!", but I guess that Kneale and O'Herlihy knew better. BTW Samhain in the Scots' mind connotes the month of November also.

I first read about "Halloween III" in "Twilight Zone" magazine--jeez, I miss TZ--which is why I could say with confidence it was different from the rest of the "Halloween" series.

So what did you do for Halloween?