A Day At the Minute Man Minimall, Part 2

Or, the snark is strong with this one.

So as you may recall, last time I cluttered the Intarweb with pics of me running riot at the Culpeper Minute Man Mini-Mall. I'd like to thank The Girlfriend for her patience, understanding, readily available iPhone, and for curbing her entirely understandable impulse to hit me on the back of the head with a military surplus entrenching tool. She's pretty cool that way, even when she crosses over to the other side of the street and pretends I'm just some random lunatic stranger she happened to encounter while minding her own business.

Meanwhile, since I happened to have my phone with me and am pretty much a Self-Amusing Personality, well, I had to take a few pics to demonstrate why I find these places so deeply fascinating. First up, 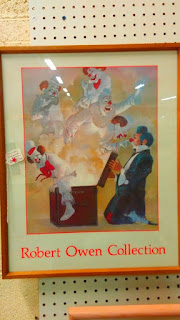 Yep. Clowns. There's just something creepy about clowns, as my friend Wayne and a few others can attest. What I find deeply disturbing is that someone, somewhere decided to purchase this particular print and have it framed, more than likely giving it a place of honor in his or her home. I mean, where do you put something like this? The bathroom, maybe? It's a guaranteed sure-fire remedy for constipation. 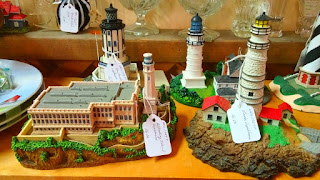 Ceramic figurines of lighthouses--they're not to my taste, but I can understand wanting to collect them. They're kind of cute and, perhaps, nice little reminders of a trip to the seashore. However, notice, if you will, the central piece. That's Alcatraz. The prison. That prison. Which means some company executive decided it was worth the time and money to tool up the factory and produce miniature Alcatraz figurines, which he wouldn't have done unless he/she thought there was a significant market for such an item. Who buys these? More importantly, who bought this one and how did it wind up in an antique store in Culpeper, VA? It's thoughts like this that keep me awake at night. Someone for some reason saved an intact and unused 1948 calendar. Someone more creative than I could get an entire novel out of this. I'd read it. 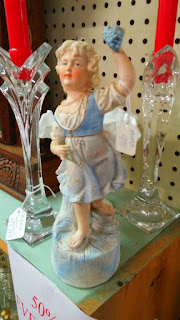 When I saw this out of the corner of my eye I first thought she was holding the deoxygenated heart of her mortal enemy. Even with a closer look I'm not convinced she's not. 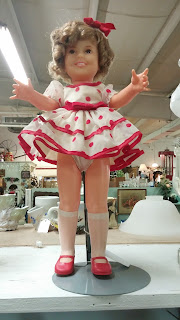 It's a Shirley Temple doll from the '70s. That's not so unusual in and of itself, but what pedophile decided it was a good idea to display her on a top shelf with a clear view of her underwear? I mean, if it were a Miley Cyrus figurine, yeah, sure, but Shirley Temple? Ya gotta wonder. 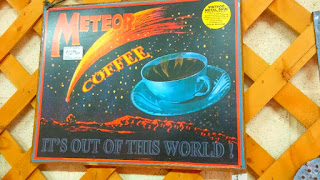 I actually think this is kind of cool. If it was authentic and affordable I would snatch it up in a heartbeat as a present for any one of my coffee-addicted friends (I'm looking at you, Anne!); as it is, it's just kind of neat. 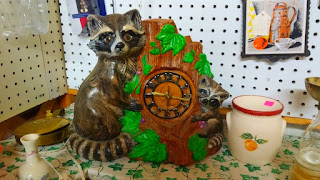 This, obviously, is yer basic racoon clock. In my mind, it needs the proper setting, perhaps on the fireplace mantle of a 1950s tract house den finished in blonde knotty pine paneling. Or above the stove in the kitchenette of your mobile home. Whatever. It needs a good home, but The Girlfriend vetoed its purchase. 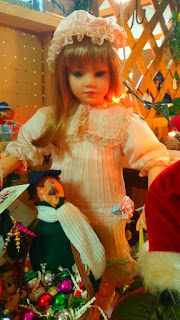 I know there's an entire sub-cult of people who collect these oversized lifelike dolls and I'm sure they're all very nice folks, moral and upright, but people, we're in Uncanny Valley territory here as far as I'm concerned. They're just spooky. 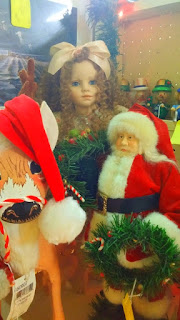 Not even Santa Claus (who's also a little spooky) and a reindeer can assuage the Creepy Factor. Imagine, for a moment, walking into a darkened room full of these dolls: 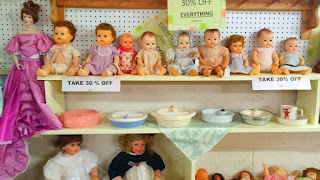 Chucky is downright cute and cuddly, by contrast.

Meanwhile, in another corner of the store: 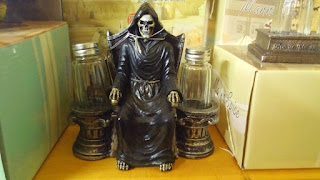 Yep, it's our eventual friend, Mr. Death, as a salt and pepper holder. I don't even. Seriously, who's the target demographic for this? Are there such things as kitschy Goths? And therein lies a story idea, a trailer park exclusively for Goths (are you listening, Wayne? Martin?).

Then there are the other extremes: 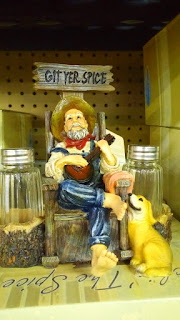 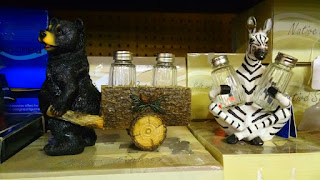 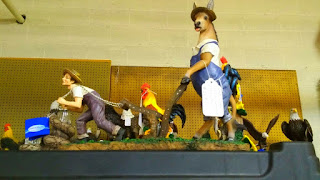 Still, there's nothing like a fake stuffed raven for all your home decorating needs: 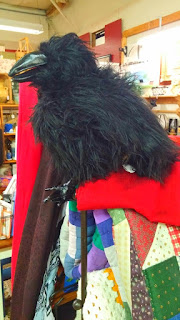 Or a pair of African figurines: 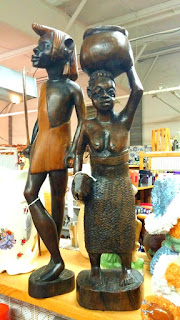 Yeah, the Culpeper Minute Man Mini-Mall is going to be a regular stop for me.

Except late at night when the moon is full and the wind rustles the leaves in the trees. 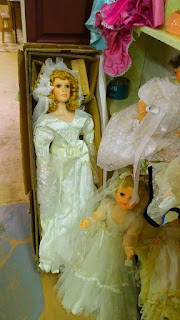 A Day At the Minute Man Minimall Part 1

Or, Why You Can't Take Me Anyplace Nice.

So there have been just a few little life changes since last I blogged. Let's see, I retired, I bought a new car, I grew a beard, I found a girlfriend, I turned 60, I had a heart attack, I had three stents placed in two coronary arteries, I developed Type II diabetes, I had to vacate my apartment in Richmond, VA after 24 years of residency because the landlord wanted to totally gut the place and charge oodles and oodles more rent, I did a major purging of books and possessions thereby proving once and for all I am not a hoarder (stop laughing; I can hear you), I relocated to Culpeper, VA and moved in with my girlfriend and her daughter and her daughter's husband and her daughter's cat...

Yeah. It's been interesting.

But that's not what I came here to talk about. I mean, if anyone is really curious I'll be glad to go into more detail on any one of those topics if you insist, though it's my guess you'd be better served by watching several hours of Nicholas Cage hosting incontinent ninja monkey wrestling.

Anyway, The Girlfriend, knowing my deep, abiding love for all things cool and kitsch, took me to the Minute Man MiniMall, your basic antique store/curio shop/indoor flea market, figuring it would be a fun, entertaining way to spend the afternoon.

She had no idea what she was getting into, poor thing. I mean, me in a store full of oddball items with only minimal adult supervision? Hijinks ensued. 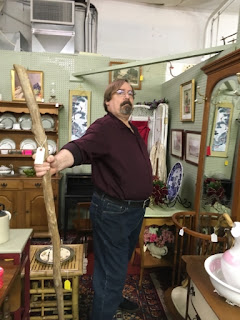 Look! A cool, albeit overpriced, walking stick!
Allow me to strike a stance and look imposing!

But then I started finding The Cool Stuff: 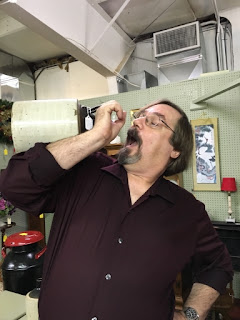 The Girlfriend was unaware of the proper method
for consuming moonshine from an earthenware jug,
so I had no choice but to demonstrate. 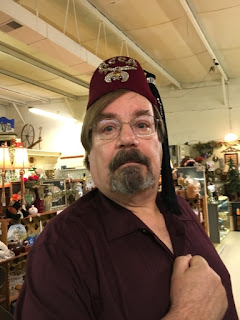 Well, it's a fez. You have to try
it on, dignity be damned. 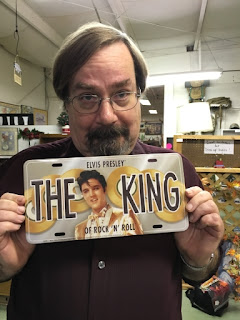 It's Elvis. Attention must be paid. 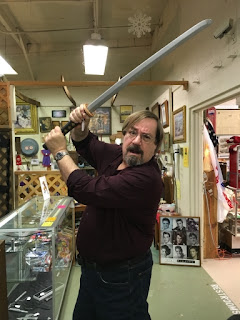 Well, what else do you do when you encounter a plastic katana?

Then things got downright silly: 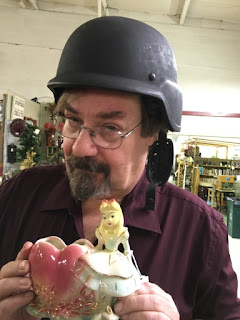 Yes, that's Alice from Alice in Wonderland.
Yes, that helmet is too damn small.
Or my head is too damn big. 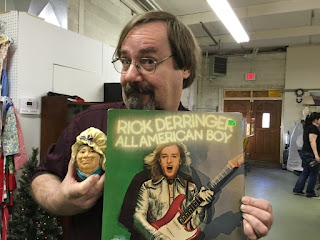 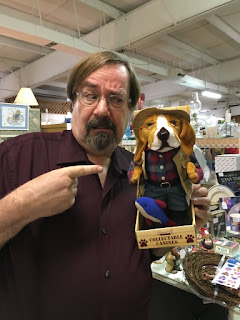 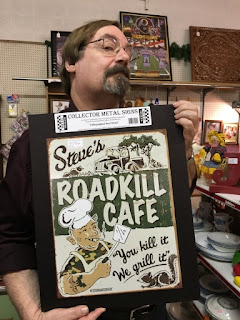 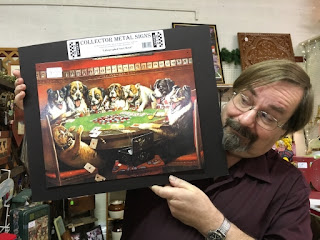 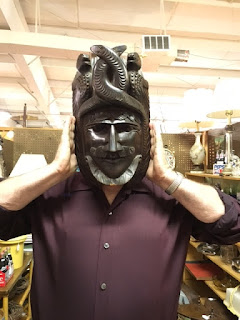 So all in all, I had a great afternoon, I'm thoroughly enjoying Culpeper, and The Girlfriend is busy reconsidering some of her recent poor life choices.
Posted by G. W. Ferguson at 1:08 AM 3 comments: