Or, Yet More of the Random Crap Which Infests My Brain.
Or, Even I Can Be Surprised.
Or, Obsessiveness is My Least Attractive Feature

So I'm tooling around the Intarwebs the other day, as I am wont to do, when I run across Covered Up: "A specific form of Older Than They Think where the cover version of a song becomes so iconic that people forget it was a cover at all. The cover becomes the definitive version of the song. To a certain extent, this is generational — if you hear a song before the cover is even recorded, you're less likely to be confused. (It doesn't count if the new version is in a different language.)"

Much of this I knew*, being an Official Old Fart who rode dinosaurs 50 miles to school uphill both ways while fighting off encroaching saber-toothed tigers and glaciers with nothing more than my Australopithecine wits and a sharpened sti--HEY, YOU KIDS, GET OFFA MY LAWN! Mostly my reaction was summed up by this online exchange (and others):

And with example after example I kept shaking my head, thinking, "How can people not know this? Eh, kids today..."

But then I ran across a few items that made me acutely aware of my own ignorance:

--The Clash's version of "I Fought the Law" (I knew this). Even Bobby Fuller's 1964 version isn't the original (I didn't know this). The song was written by Buddy Holly's backing group, The Crickets, in 1959 (I had absolutely no idea and had to go to YouTube for verification). (there's an alternate version by the Dead Kennedys, by the way).

"Wild Thing" was written by Chip Taylor (brother of Jon Voight) (!!!) and originally recorded by the Wild Ones in 1965. A year later, the Troggs covered the song, it stormed to #1 on the charts, and the rest is history (though I've always been partial to the Jimi Hendrix cover).

"I'm Henery the Eighth, I Am" was not written by Herman's Hermits. It is significantly Older Than They Think, having been penned in 1910 and originally recorded by Harry Champion.

Patsy Cline's signature song, "Crazy", was in fact written by Willie Nelson, and later covered by him.

"Louie Louie" was not written by the Kingsmen. Nor was it improved or rescued from obscurity by them. It was written and recorded in 1956 by Rick Berry and the Pharaohs, and was very popular in the rock and roll community around Seattle and Tacoma (and in those communities, the Kingsmen's version wasn't even the most popular - it was the one by the soon-to-be-famous Paul Revere and the Raiders). All the Kingsmen did was to make it visible to the white youth market across the US, and slur the vocals so much that the lyrics could not be understood, making it sound naughty and subversive. The slurring was unintentional: They recorded the song using one microphone mounted on the ceiling, Jack Ely's voice was shot from taking part in an all-night Louie-Louieathon(and he was wearing braces at the time) and, while aware that they had to record in one take, the band didn't know that the tape was running and thought they were doing a rehearsal play through. The FBI actually investigated the "obscene" lyrics with the aid of analysts and linguists and, after 18 months, declared it "unintelligible at any speed", proving themselves unable to determine the authorship of a published song! And while they questioned a number of people in the course of the investigation, for some reason Jack Ely was never brought in and asked to repeat what he had sung. (Nor, apparently, did they notice the actual profanity that a member of the band shouts after missing a cue 53 seconds in.) **

And in one of those truly bizarre examples of serendipity (serendipitous in that just this weekend I'd been suffering from an earworm infestation of this very song), {m}any more people are familiar with Cyndi Lauper's cover of "Money Changes Everything" than the original by The Brains.

That's for sure!
Cyndi's version

The Brains
So there ya go! Hours and hours of cocktail party conversation all in one little blog post! You. Are. Welcome!

...but was preceded by a, uh, somewhat different version, "Jet Boy, Jet Girl," a singularly disturbing song by Elton Motello...

...and later covered by such wholesome groups as The Damned.

*Examples: "Last Kiss" was first recorded in 1962 by its author, Wayne Cochran. The first hit version was released in 1964 by J. Frank Wilson and the Cavaliers. Then Pearl Jam covered it after Eddie Vedder found a copy of the 45 single at a flea market).

"One Tin Soldier" was first recorded by The Original Caste, not Coven (but who can tell the difference?).

Iconic surfer song "Misirlou" has its origins in folk dance; Dick Dale had learned it from his uncle, a Lebanese folk musician, and originally adapted his version, at greatly-increased tempo from the original, on a bet that he could play an entire song on a single guitar string. It began as a Greek rebetiko song in 1927, as performed by Michalis Patrinos (cite The Other Wiki). True authorship is unknown, as is the case with most rebetiko songs. Nowadays, credit is given to either Patrinos or Nicholas Roubanis (who created a jazz arrangement in 1941), and S. Russell, N. Wise and M. Leeds who wrote lyrics. It's also been covered in various other styles, including Klezmer. And now, of course, a lot of people think of it as "The Pulp Fiction Theme". 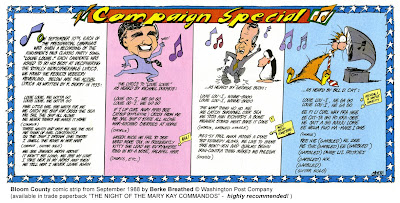