A re-post, but I love this! 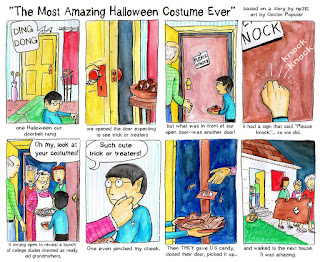 CERAMIC HALLOWEEN VILLAGES???!!! How in Great Cthulhu's name did I miss out on that?

There I was, March 2016, and The Girlfriend had left me alone and unsupervised in this huge-ass card & gift shop, so, naturally, I had no choice but to amuse myself as best I could. I began to look for weird stuff to photograph so I could make snarky comments about it on Facebook. Little did I realize there was an entire section of my kind of weird: Department 56 Halloween houses and accessories. Look at 'em (the pics are mine; the links take you to each item's Department 56 webpage)! 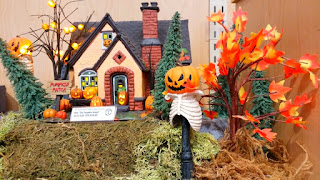 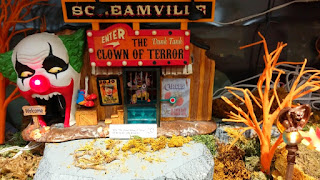 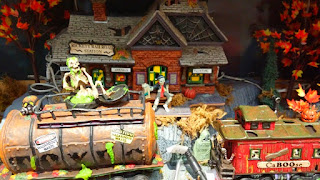 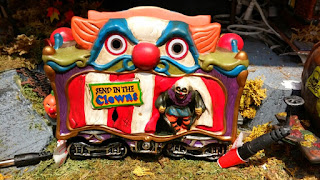 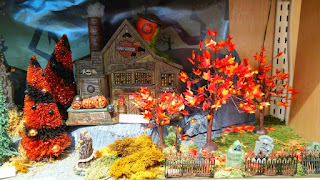 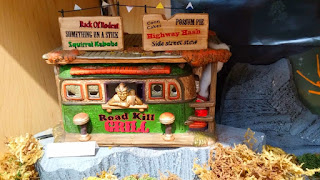 
And there are so many more! Not to mention other manufacturers, like the Lemax Spooky Town Collection.

Update: Wanna know how cool my girlfriend is? She has no idea I'm writing this post, much less what it's about, but earlier today she gave me this Hearse of Bones! 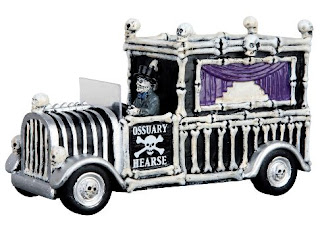 Be sure to check out the other participants!

On Halloween Strange Sights Are Seen

You've got to love vintage Halloween postcards. What was once cute and adorable is now strange and creepy. 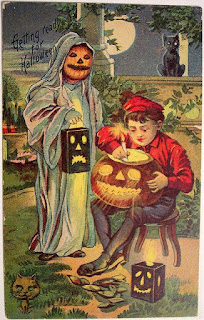 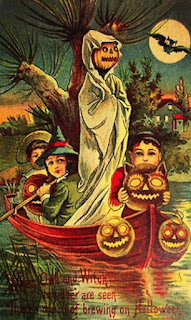 ...then taking it for a nightmare ride across the River Styx! 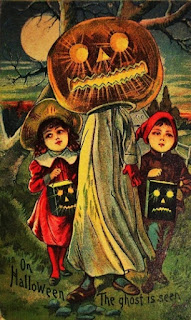 After which the little children are led to certain doom. 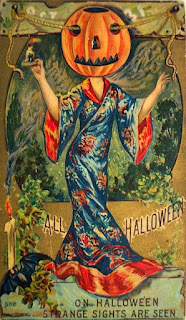 I mean, look what happened to this woman. 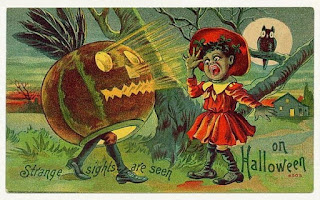 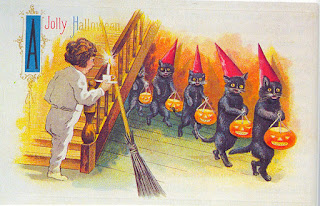 Enough to make you wish you'd gone to bed and pulled the covers over your head. 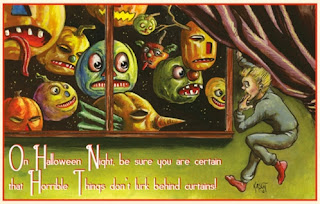 Or hadn't eaten those odd-looking mushrooms. 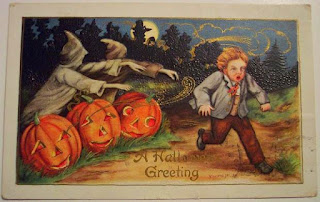 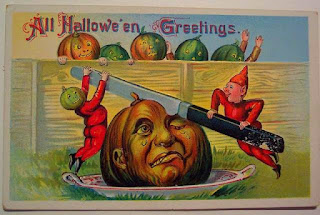 Or this could happen to you! 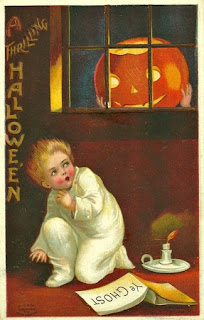 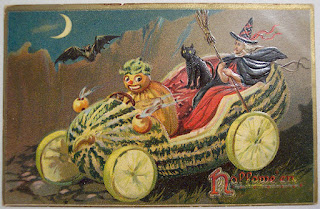 But beware of any potential acquaintances driving a fruit and vegetable car. 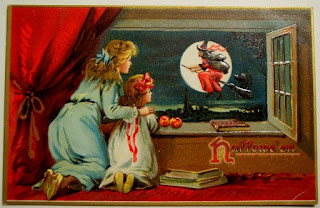 Best to stick with your mom... 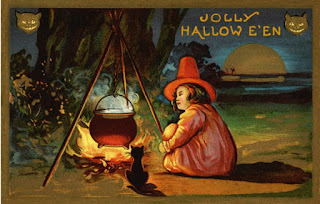 ...but maybe not your sister.

Be sure to check out all the other participants at the 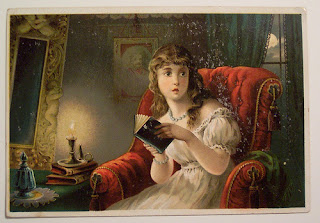 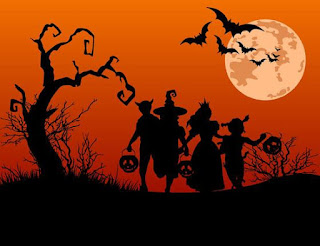 Conal Cochran: {Y}ou don't really know much about Halloween; you thought no further than the strange custom of having your children wear masks and go out begging for candy.

It was the start of the year in our old Celtic lands, and we'd be waiting in our houses of wattles and clay. The barriers would be down, you see, between the real and the unreal, and the dead might be looking in to sit by our fires of turf.

Halloween, the festival of Samhain! The last great one took place three thousand years ago, when the hills ran red with the blood of animals and children.

Conal Cochran: It was part of our world, our craft.

Conal Cochran: To us, it was a way of controlling our environment. It's not so different now. It's time again. In the end, we don't decide these things, you know; the planets do. They're in alignment, and it's time again. The world's going to change tonight, doctor; I'm glad you'll be able to watch it. And... happy Halloween.


Ah, it's Fall! The skies are overcast and gray, the streets are wet, the temperatures are cool when not outright chilly, the leaves are just beginning to show their true colors, and there's a certain... feel... in the air: that Autumn feel so beloved by Autumn People. We're entering what Ray Bradbury called The October Country, "that country where it is always turning late in the year. That country where the hills are fog and the rivers are mist; where noons go quickly, dusks and twilights linger, and midnights stay. That country composed in the main of cellars, sub-cellars, coal-bins, closets, attics, and pantries faced away from the sun. That country whose people are autumn people, thinking only autumn thoughts. Whose people passing at night on the empty walks sound like rain."

From an early description in a blog post I can no longer locate:

"The Halloween Countdown is something of a virtual neighborhood to go trick or treating in. Imagine a neighborhood where all of the neighbors really got into the spirit of the holiday and went all out with decorating their yards and homes and on top of that also handed out the coolest treats whenever some kid in a costume rang their doorbell. Well, you are that kid in a costume, and the participants in the countdown are the neighbors with the cool houses and candy. When you visit their blogs, you will essentially be ringing their doorbell and shouting 'Trick or treat.' rewarded by a solid thunk at the bottom of your plastic Halloween bucket which is their post for the day. In a way that's even better than the actual Halloween (no way! I hear you saying) you get to ring their doorbell and trick or treat every single day throughout October. Not only that, but there is bound to be over 100 houses for you to visit each day as well."

Let's let Stephen Lynch get us in the mood...

Halloween
Thinking of all the cool creatures
That I will meet... on this night.
Ghosts and goblins and witches,
Roaming the streets... in moonlight.

Bowls of candy and goodies,
Delicious and waiting... in store.
The sound of cute little footsteps
As they approach... my front door.

Letting the children inside to drink beers,
Razor blades hidden in Three Musketeers,
Screams from the basement of kids begging to be set free...
That's what Halloween means to me.

Tightening the clamps that are holding
Their little heads... so tight.
Putting my lips to their ears
As I whisper, "Please... don't fight."

I promise I'll let you go home
If you swear not to tell... a soul!
Well, I'll just untie these—I'm kidding.
Now, where is my chainsaw? Let's rock and roll!

A pinch of your brother, a teaspoon of you,
With the head of your sister, would make a good stew.
I'd give you a taste, but your tongue's in the stew. Irony!
That's what Halloween means to me. 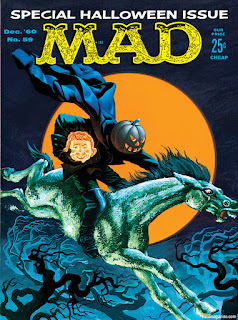