'While Strolling In the Park One Day..."

"...All in the merry month of May,
I was taken by surprise..."
--The Fountain in the Park by Ed Haley

So there I was, wandering through Byrd Park near The Round House (photo, not mine) when I stumble across this: 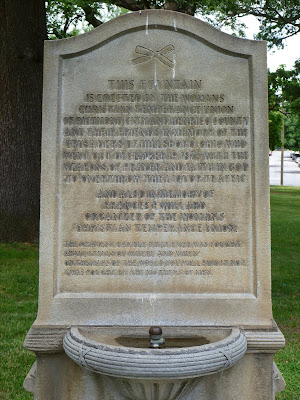 THIS FOUNTAIN
IS ERECTED BY THE WOMANS
CHRISTIAN TEMPERANCE UNION
OF RICHMOND CITY AND HENRICO COUNTY
AND THEIR FRIENDS IN MEMORY OF THE
CRUSADERS OF HILLSBORO, OHIO WHO
WENT OUT DECEMBER 19, 1873 WITH THE
WEAPONS OF PRAYER AND FAITH IN GOD
TO OVERTHROW THE LIQUOR TRAFFIC;

AND ALSO IN MEMORY OF
FRANCIS E. WILLARD
ORGANIZER OF THE WOMAN'S
CHRISTIAN TEMPERANCE UNION.

THE GRAVEST BATTLE THAT EVER WAS FOUGHT!
SHALL I TELL YOU WHERE AND WHEN?
ON THE MAPS OF THE WORLD YOU WILL FIND IT NOT;
IT WAS FOUGHT BY THE MOTHERS OF MEN.
And I'm thinking, "OMG, I've lived here for 19 years, passed through the park dozens of times, and never noticed this before? WTF?"

Here's what's amusing to me: (1) the water's been turned off and has probably been off for many years, and (2) there's a local AA group which holds a Sunday morning meeting in the Round House (many recovering alcoholics are heavy, heavy smokers and the WCTU was definitely anti-tobacco as well as anti-alcohol).

Here's more from the Historical Marker Database. and a page about the WCTU drinking fountains: "At the 1874 organizing convention of the National Woman's Christian Temperance Union, the members were urged to erect drinking fountains in their towns so that men could get a drink of water without entering saloons and staying for stronger drinks. Often the drinking fountains that were erected offered a place for horses to drink, another place for dogs, and of course, a place for humans to drink."
Posted by G. W. Ferguson at 7:36 PM

I recently read a good Bill W. biography that talked about how he was always at odds with the Oxford Group folks because he made no bones about his plans to continue smoking and womanizing. Good times.

I didn't, Sarah; it was those damned Temperance women!

"All things in excess! Moderation is for monks!"
--Lazarus Long