So I was Googling some addresses in my old hometown of Waynesboro, VA the other night and in one of those bizarre-o moments for which the Intarweb is infamous I ran across an ad for this particular piece of real estate: 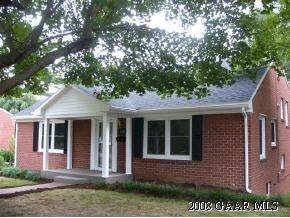 It looks a little different: there was no porch to speak of, only that concrete stoop, the sidewalk was edged with monkey grass, and there was shrubbery all along the front. It also appears that someone got smart and removed those wretched Chinese elms with their tiny, unrakeable leaves and lawnmower-jarring roots from the front yard and I sincerely hope they did the same in the back--no love was lost between me and those rat-bastard, thin-branched, lame-ass pseudo-trees. That's a red maple in the picture, incidently, a tree for which I have a great deal of respect.

There's a virtual tour, which probably won't be online for long, which made me feel... strange... since I never, ever expected to see the inside of that house again. Lots of changes to the interior--the dining room and kitchen were both miniscule and I see subsequent owners knocked out the wall separating the two to make a semi-decent-sized eating area (don't be fooled by the pics; that's one hell of a wide-angle lens they're using). They've repainted everything (except the basement, which the realtors are calling a "family room"--you'll need a family to huddle with to avoid hypothermia during the fall and winter) and ripped out the wall-to-wall carpeting, probably because most people were overwhelmed by my mother's fondness for robin's-egg blue.**

The open door you can see at the top of the staircase leads to what was my room.

Ah, me. Do you suppose the new owners will ever wonder why there's a large patch of discolored concrete flooring in the laundry room**** or discover the small pet cemetery in the back yard? Are there still (much missed) boxes of toy Civil War soldiers and a Playboy centerfold hidden under the floorboards of the attic?

***Okay, not quite everything. My parents' bathroom was a subdued pink, the bathroom I used (which was also the guest bathroom) had gray tile and off-white walls, the kitchen cabinets were that yellowish knotty pine so popular in the early '60s, some of the living room chairs were pinkish and they had some wood furniture in natural finishes.

Wow... that IS a blast from the past.

On a relatively recent (within the last couple of years) trip back to visit Mom, I went for a run over in your old neighborhood, and I just couldn't recall which of the several similar houses on that side of Robin Road had been yours... now I realize what the problem was: that roof over the porch and the singular lack of shrubbery! Nih!

Yeah, that was definitely not a win. Without the shrubbery the place looks naked, unfinished, nondescript, just as it was when we moved in. I'm still trying to decide if I like the roofed porch or not; it needed... something... but I'm not sure that was it.

See, that's what's great about your mom's place: the magnolia trees get bigger but the ol' homestead looks the same, which reduces the discomfort of my age-related cognitive dissonance.

Well, the old homestead (mine--or rather now, my mom's) could use a little help in the shrubbery department! The boxwoods by the porch steps haven't been pruned properly in years and years, and the evergreen whats-it beneath the dining room window has seen MUCH better days. But yeah, those magnolias are still going strong!