Or, Let's Start An Internet Meme!

It's probably a bad idea allowing me online without adult supervision, especially when my friend Wayne is added to the mix, but, well, things happen.

You may recall from The Saturday Night Snicker that Wayne and I went into schoolboy convulsions imagining unlikely actors portraying The Joker; Ernest Borgnine and Abe Vigoda being the candidates we found most hilarious.* Well, one thing led to another and finally we decided ol' Abe really, really needed greater Internet appreciation, best accomplished with a viral meme (click for larger image, not that you'd want one**) 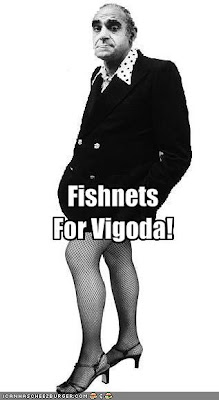 So Friday evening Wayne sent out a mass mailing...

Hey, everyone. This is a joint request from myself and GW Ferguson in his Secret Lab up in the Virginia hills. I am attaching a photo. Of Abe Vigoda in fishnets. If you are doing a different blog tonight, simply add this one as well. GW and I would like to see the subject heading as "Fishnets For Vigoda" on each blog so that this would appear very high up on the Googleometer.

Again, a simple request. In return, I shall mail everybody who does this a bus token good for any ride in Sheboygan, Wisconsin. My late Uncle Tony owned a tool & die joint and left me about three hundred tokens.

Let's do this and make Abe Vigoda the star he is!!!

Want to be part of something...different...on a Friday night? Well, my pal Wayne and I are trying to start an internet meme, "Fishnets For Vigoda!," and what we'd like you to do is make a blog post somewhere, somehow, entitled (duh!) "Fishnets For Vigoda" and include this picture (safe for work, but not your sanity).

Tell your friends, your family, that creepy guy with a laptop in the corner of the coffee shop! Let's make "Fishnets For Vigoda" register HIGH on the ol' Google-o-meter!

It's in the wild now, so let's see what happens.


*Or not. After all, it was Lon Chaney, Sr. who once said "A clown may be amusing in a circus ring, but what would be your reaction to opening your door and finding that same clown on your front step at midnight?" Admit it--there would be something undeniably...disturbing...about either Borgnine or Vigoda in Joker makeup. Which reminds me of a slightly off-topic story:

Soon after the release of Blue Velvet, Dennis Hopper (who played the seriously deranged Frank Booth) made an appearance on David Letterman and good ol' Dave asked the question on everyone's mind at the time (well, one of them)--what was it Frank was huffing during certain scenes? According to Hopper, the script originally stated it was helium, but that was David Lynch's idea and Lynch, apparently, was significantly drug-naive. Hopper explained to him that helium would do nothing except give the character a Donald Duck-like voice and then suggested amyl nitrite, to which Lynch acceded, saying really, what it was didn't matter. And then Lynch paused and said something to the effect of "but, you know, it would be really interesting if we did do it with helium."

And to this day I can't listen to "In Dreams" without thinking of Donald Duck screaming "Don't you fucking look at me!"

**You know, for something as simple as attaching a pair of fishnet be-stockinged legs to a portrait of Abe Vigoda, that was a LOT of work! I don't have Photoshop and, sure, I could have downloaded GIMP, but that seemed akin to hunting rabbits with nuclear weapons--overkill. I made use of what I had: Microsoft Paint, the software that came with my (aging and obsolete) Olympus D-380 camera, OpenOffice, back and forth, clipping and cropping, erasing this and that, converting to monochrome...whew!
Posted by G. W. Ferguson at 1:49 AM

I'm sure the union was a lot of work! I have adobe photoshop and still don't understand the workings of "layers", but you did a damn fine job. Abe never looked so, alluring. I remember the time that someone had reported that he had died, and that caused him a lot of grief (and job opportunities). I think he looks sort of like Karloff (in an italiante sort of way.) And wouldn't Jeremy Irons be a dead ringer for Boris? "Prepare ye the way... "(remember Lee?)

Well, I just know the FFV is on a slow start. Ungrateful readers. Writing about their baby's firs poopie or their newest movie deal which involves baby's first poopie. Do I sound bitter? Well, Beth posted, as did Hemlockman in NC and Steve Malley in NZ.