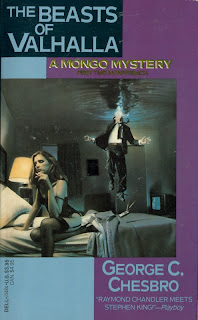 Lifted from the MetaFilter article which lifted it from somewhere else:

"Out of nowhere, believing that it is good for the soul to have one insane idea a day, whether you need it or not, the notion of a dwarf private detective came to me [...] I considered such a character bizarre and absurd, unworkable and unpublishable, and thus a waste of time to spend any length of time trying to develop it. I kept searching, but the damn dwarf just wouldn't go away. [...] It was to be a satire. Halfway through, I discovered a key to the man's character was a simple quest to be taken seriously, for dignity. That touched me, and I started over again, this time doing it "straight" (or as straight as I'm able). I gave Mongo dignity, and in return he gave me a career. The diverse background was, I thought, necessary in order to properly equip him in a 'world of giants'."

You read right--his series detective was a former circus acrobat with dwarfism, a black-belt in karate, and a professor of criminology at a New York City university. In less capable hands such a hero would be just... ludicrous... but Chesbro is not blowing smoke when he talks about "a... quest... for dignity," which is the beauty of the Mongo novels and short stories.

In 1990 I was engaged in the relentless (and ultimately fruitless) pursuit of an attractive woman I met at a friend's wedding, a bridesmaid, in fact (and later she would refer to herself as "the Bridesmaid from Hell," which was more prophetic than I realized). In the course of a few weeks I decided she was no less than my soulmate: she loved Halloween, trashy horror movies (claimed The Texas Chainsaw Massacre 2 was one of the funniest things she'd ever seen), Charles Addams/Gahan Wilson cartoons, decently-written splatterpunk stories, Tango & Cash, Vicks NyQuil...

...and the novels of George C. Chesbro.

I'd never heard of him, so she bought me an autographed hardcover copy of Bone as an introduction and after devouring the damn thing in a single night I was hooked, tracking down previous novels, anxiously awaiting the new ones, scouring the local libraries and used bookstores for whatever was out of print... you know, my usual OCD-tainted routine.

The Bridesmaid decided my obsessive nature was a bit too much to deal with and so she moved on to greener, saner pastures, leaving me heartbroken but with a decent pile of reading material in which to lose myself.

Soon thereafter, Chesbro disappeared during the great "let's-dump-our-marginal-mid-list-authors" purge of the '90s and all his books went out of print until he and his wife formed their own publication company.*

Check out his website, check out this great Bookslut article, "Short, Sharp, Shock: The Work of George C. Chesbro," and light a candle for one of the great underappreciated genre writers of our time.


*This happened to a number of writers I dearly loved-- Lewis Shiner comes to mind and, fortunately, like Chesbro, he secured the rights to his work and began self-publishing.
Posted by G. W. Ferguson at 1:30 PM